The End Of Tel Aviv Redux 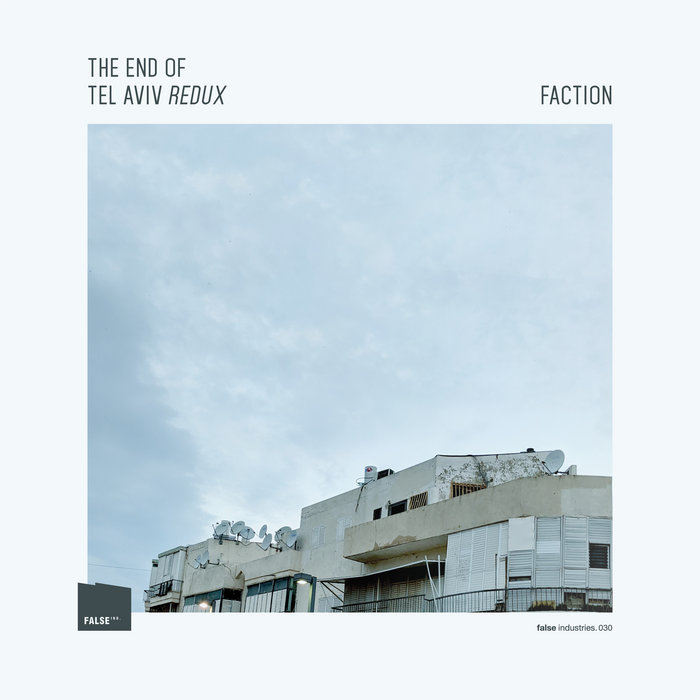 False Industries is proud to reissue a forgotten gem that could be
seen as a defining moment for Israeli electronic music, one that was
forgotten and is now re-imagined to fit the creator's vision.

In the last couple of months I had found people asking me about my old project Faction.
We had one release on the British label Neo Ouija in 2004, and some tracks on a compilation but they were a hazy memory. When I discovered the release could not be found online, I contacted
Rani (the other half of Faction) and we started this project, re-releasing our album "The End Of Tel Aviv".

Yair and Rani met in 1999 but started making music together after Lee Norris asked them to remix a tune that he released under the moniker Norken. Both of them had a bit of production skills and some equipment in their living room, when the remix was released and received some good reviews - they started a new project, called Faction.

The Israeli scene in those days was mainly provincial and obsolete. Psytrance roled the mainstream side of things, people who did experimental music either went to a very academic
realm of noise or stayed with the sounds of early 90s Warp IDM.
Faction did not want to settle with that, they saw themselves as equal to the producers and musicians in Detroit, Berlin and London.

They started a movement that for some time became a
known-phenomena and changed the way people think and understand about the connection between music and art in Tel Aviv. Together with Zegunder, Ido Govin and Ran Slavin it was a nucleus of artists who would create art and music within Israel but had their influence in Europe,North America and Japan.

Faction was at the center of this micro scene, we had regular events in Tel Aviv (Sunday Xanaxat the Sofabeat) and Jerusalem, this scene broadened the connection between styles like
Shoegazer, twee rock, electronic music and even techno and club oriented music. At that time they played with artists such as: Frank Bretschneider, Ulrich Schnauss, Klimek amongst many
others...

Faction created their landscape of sound, one that was totally isolated from their middle eastern environment, and one that was very secluded from the local scene in Tel Aviv. It seemed that
for a short time, they had their own scene, one that was fuelled with many hours or IRC chatting with fellow musicians from Europe and the U.S.

The easy way would have been to re-release the original CD and make it available online, however, Faction were never happy with the original release, they were both young and
inexperienced and both settled for things that they might not otherwise agree to nowadays.
Since Yair’s computer died a short time after the release, the only way to find something was by Rani checking some CDs he brought with him when he left Tel Aviv a long time ago.

Lucky he found a lot of music that was made at the time when they were both working on the “The End Of Tel Aviv” some of it consistent from different versions of tunes that were released on the Neo Ouija release. They decided to remove two tracks they didn’t like in the context of the older album and added more tunes that were forgotten and never used.

Those tracks add more depth and with added value of two different versions of tunes that were released in the original album, we think the listener gets a better overview of their work. We had the benefit of remastering the whole album from the original pre-masters by Emmanuel Geller from Salz Mastering, giving the album another layer of depth that both Rani and Yair felt
was missing.

Currently, Rani and Yair are not living in Tel Aviv. One is living in the north of Israel and the other in Berlin, Germany.

All the tracks were written, produced and mixed at The Click Factory and The Household Studios. Final mix was done at EOM Studios.

Design by Tubi at Sound&Vision