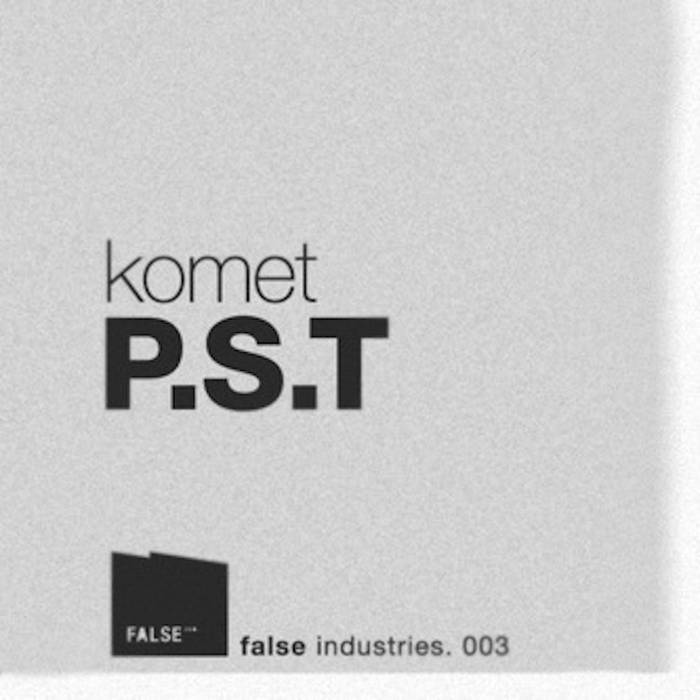 Our 3rd release is very special. Frank Bretschinder who is one of the true innovators of the minimalistic sound, re-animates his Komet moniker on False Industries.

Frank bretschneider, is one of the pillers of the electronic music. With releases on seminal label like Rater-Noton, 12K, Audio.Nl, Mille Plateaux and others.. We are very proud to release some of his work. After studying fine arts and publishing several graphic editions, he began to satisfy his obsession for electronic music in 1984 by starting his first tape experiments and running a cassette label.

With the founding of AG Geige in 1986, a successful and influential band of East Germany‘s musical underground, he began to explore the possibilities of an exchange between visual art and music by various means such as film, video or computer graphics. After the fall of the wall and the split of the band Bretschneider continued producing music and in 1996 he co-founded the record label Rastermusic (Raster-Noton since 1999). Frank will release a full album under Komet for Shitkatapult later on 2011.

PST is all about digital beats, heavy bass sequences and a certain atmosphere to it. The original tracks are very minimal but theres a propose behind this idea. Franks music is very precise and each part is spot right. He shows you do not need too many elements to make a perfect tune.

P.S.T 05 starts with delicate sequences, and some soft digital beats, soon it accumulate, into a minimalistic electronic tune. While Komet takes the progression of the tune and adds more beats, sequences ,Field recordings and many more delights. Flights 09 takes when PST left, starting with a huge bass, it slowly builts into a monstrous miniml tune. While Komet keeps it interesting all the time. The beats are very digital but a syncopated.
Pure Delight. Clap 05 – is built around super heavy sound, and its not exactly a 4 on the floor tune. Slow the beats and other elements are blended into this tune. Making it still minimal but quite powerful.

we asked a wide range of producers and composers to remix and re-work the originals. The remixes show the spectrum of sound that we here at False Industries will try to release at 2010. From highly textured modern composition, to weird minimalistic dubstep oriented tune. First remix is from Donnacha Costello (under his MSF guise), who is known for his seminal releases on Minimse, Poker Flat and many other labels. Donnacha takes the original Clap 05 tune, and sends it the early 90s warehouse techno days. With some lovely synth sequences and some heavy bass action. Second remix comes from Logreybeam aka Gabe Morley who released works at labels like City Centre Offices, Type and Shadetek. He turns the original into a slow textural affair, leaving only traces of the original beats, but keeping it interesting.

Label boss, Yair Etziony, keeps a lot of original elements from PST, but adds his own trade mark digital beats Drones and textures. The two other remixes are for a tune that did not make the final cut, but the remixes were good, so the decision to release them was quite obvious. Dieb who released the first EP on False Industries, turns Steam into a minimal techno tune. Like always with Dieb, this is not your classic ordinary techno tune. The beats are very syncopated and all elements are very accreted and precise. Last remix is from our new signing, The mysterious Tramway V, who takes the orignal and Turns into a dark percussive tune with industrial feel to it. Call it post Dubstep, call it bass music, we call it ear candy.

Mastering by Chris McCormack
Artwork is done by Tuvia Kudashevitz